Wealth trends appear similar as income trends. The recent assessment from Credit Suisse finds that the median wealth of Russian adults this year was about 3,700 dollars (3,400 euros), or about the same as in 2012.

Poverty has increased in recent years, but seems to have stabilised at levels last seen about a decade ago. Nearly 20 million Russians (about 14 % of the population) live below the official subsistence minimum. The official subsistence minimum this year is about 11,000 rubles (160 euros) a month per person. A recent survey from the non-governmental Levada Center found that Russians themselves define the poverty level as about 12,500 rubles a month.

The distribution of income and wealth in Russia has not changed notably in recent years. The Gini coefficient, a rough indicator of income disparity, was 0.41 last year. The World Bank finds that income equality is roughly the same as in the United States. Relatively high income equality is found in the Nordic countries (Gini coefficient below 0.3), while the greatest income inequality is typically found in certain countries of Latin America and Africa (Gini coefficient above 0.5).
Russian wealth distribution, however, is among the most skewed in the world. Credit Suisse estimates that the Gini coefficient for wealth distribution in Russia is 0.88, the highest disparity of about 200 countries surveyed. Russia’s richest 1 % own nearly 60 % of the country’s wealth. In most countries, the share is below 50 %. 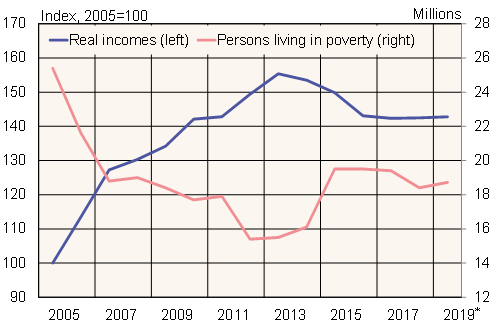