Despite the third-quarter reversal, the federal budget surplus for the last 12-month period still amounted to nearly 3 % of GDP. The turn reflects shifts in both revenues and expenditures. After having risen by 10 % in the first half of the year in nominal terms, budget revenues now rose by just about 2 % y-o-y. On-year growth in spending accelerated as expected to 16 % y-o-y in the third quarter, after scoring about 1 % in the first half. 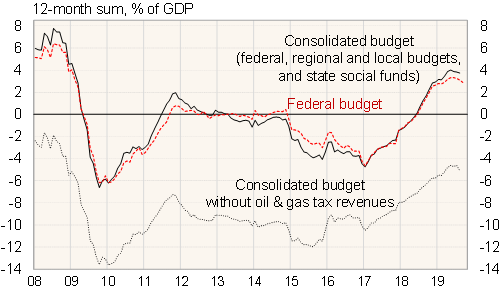 Budget revenues from oil & gas taxes went into a tailspin in the third quarter (down 20 % y-o-y) after posting large gains in numerous previous quarters. It was the first decline in oil & gas tax revenues since autumn 2016. Growth in other revenues accelerated and rose to 17 % y o-y for January-September. More of the gains came from improved tax collection rather than the impact from the VAT hike on January 1, 2019.