Tax cuts implemented over the past twelve months (i.e. cuts in the income tax, value-added tax, as well as larger tax refunds for exporters) have hurt growth in budget revenues. The finance ministry reports that the combined budget revenues of the central and local governments increased by 3 % y-o-y in the first eight months of 2019. Revenue growth was the lowest since 2009, a period marked by the international financial crisis and roll-out of a massive economic stimulus.

The slow increase in revenues, however, was anticipated in the budget released last spring. In January-August, received revenues were running at 71 % of the forecast revenues for the year, about the same level as in previous years. Last year’s budget revenue totalled 18.3 trillion yuan (2.35 trillion euros or 20 % of GDP), of which 85 % came from taxes and 15 % from other revenue streams. The biggest source of tax revenues was the VAT (40 % of total tax revenues) and the corporate tax (23 %).

A major obstacle to analysis of China’s public sector is that a considerable amount of spending takes place off-budget. China’s budget fails to mention various social security funds or the amounts of money made from sale of land-use rights. Adding in funds, sales of land-use rights and investment projects funded by local government bonds and local government financing vehicles (LGFVs), the IMF puts public-sector spending in 2018 at 43 % of GDP, revenues at 32 % of GDP and the budget deficit at 11 % of GDP. 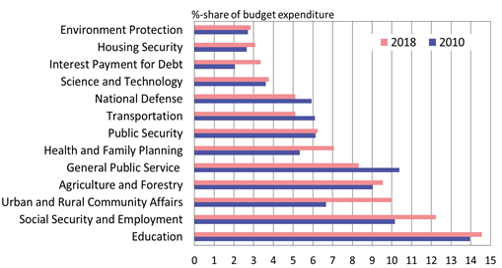