All common economic indicators for China point to a further slowdown in growth in August. Industrial output growth fell to 4.4 % y-o-y, its lowest level in two decades. Even as the severe drop in passenger car production appeared to stabilise last month, passenger car sales were still down by 7 % y-o-y. Hence, real growth in retail sales fell slightly to 5.6 % y-o-y in August.

Given the poor Chinese statistical data, it is particularly difficult to assess investment demand which is still a key component of the Chinese economy. According to available data, real growth in fixed asset investment (FAI) appears, however, to have been at most 2–3 % y-o-y in January-August.

Negative growth in producer price inflation (down 0.8 % in August), which erodes corporate profitability and diminishes corporate appetite for investment, is seen as further evidence of weakening economic conditions.

The most important factor in price trends at the moment has been food prices. Consumer price inflation accelerated to 2.8 % in August on higher prices for food and, in particular, pork. Pork prices shot up 47 % y-o-y in August as domestic pork supplies have fallen to a ten-year low. Since the African Swine Fever (ASF) outbreak a year ago, about a third of pigs in China has died or been slaughtered. China has increased pork imports. This week, ahead of the 70th National Day holiday in early October, the government released pork supplies from its strategic food reserves.

China accounts for about half of global demand for pork products. As domestic supply keeps declining and prices keep rising, the situation has significant impacts also on global markets for meat products and animal feed.

The ASF crisis has become a major political headache for Beijing as pork is a central part of the Chinese diet and even symbolic of rising living standards to many people. The situation is aggravated by the fact that the crisis has revealed serious systemic and political problems (e.g. downplaying of risks and problems, cover-ups, corruption and failures in government regulation). 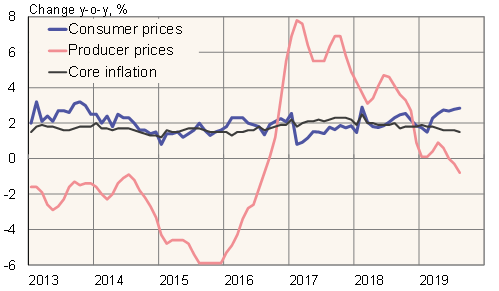