China’s commerce ministry reports that, despite uncertainty from the trade war, first-half foreign direct investment inflows into China (not including the financial sector) were bigger than ever – 71 billion dollars (up 4 % y-o-y). China’s outward FDI fell by 6 % y-o-y to 54 billion dollars. The ministry’s figures do not include financial-sector investments, which have corresponded to about a tenth of China’s outward FDI investment in recent years, and just a few per cent of FDI inflows to China.

Private western databases on Chinese outbound FDI confirm the decline in investment. According to the China Global Investment Tracker database, Chinese corporate FDI in the first half (27 billion dollars) was down by 50 % from the same period in 2018. Investment in Asia increased by nearly 50 %, while investment in all other regions declined. The value of investment flows to Europe were a tiny fraction compared to last year. The regional growth figures are sensitive to the timing of when large investments are recorded. 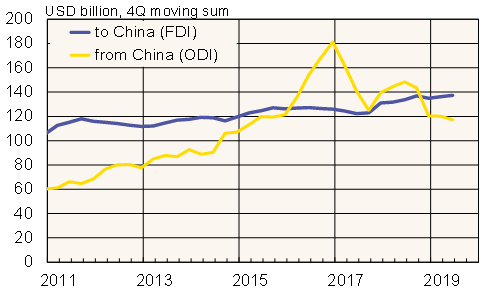