The biggest factor growing the current account surplus was the rising goods trade surplus. Export revenues rose and import spending declined relative to 1Q 2018. The services trade deficit also contracted, due largely to a drop in Chinese spending on tourism abroad (down 10 % y-o-y).

Financial account data will be released later. Based on published data, it can be calculated that the net outflow of capital (including the net errors & omissions term) was slightly less than the current account surplus, indicating a small uptick in China’s foreign currency reserves after slight declines in the previous two quarters. Monthly figures show China’s foreign currency reserves (including gold) slightly exceeded 3.19 trillion dollars at the end of April. 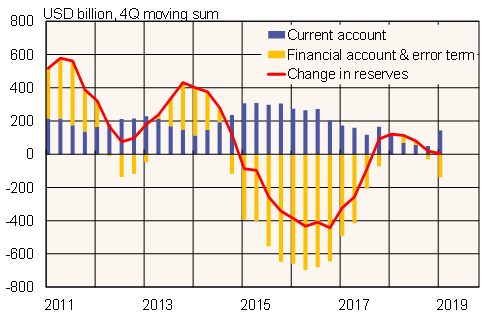