Even as trade talks with the US seemed to take a turn for the worse last Friday (May 10), the yuan’s exchange rate fluctuated without establishing a clear direction. However, the yuan lost ground quickly after the opening of Chinese markets on Monday (May 13). By closing, it had fallen to a rate of 6.86 yuan to the dollar. On Hong Kong’s less-regulated yuan market, one dollar bought 6.91 yuan. On Friday (17.5.), yuan fell further to 6.90 per dollar (CNY/CNH 6.93).

The exchange rate shift on Monday was more a matter of yuan weakening than dollar strengthening as the euro-yuan exchange rate followed a quite similar path. In addition to the trade war, yuan depreciation pressures currently include the weak new economic figures and monetary policy stimulus measures designed to keep interest rates low. The PBoC is strongly involved in guiding the yuan’s exchange rate.

International stock markets initially fell on news of trade-war tensions. Chinese share prices have also fallen considerably since their April highs. Last Friday (May 10), however, share prices rose amidst major salvos in the trade war. Possible reasons for the rise include direct government intervention in the markets and expectations of further easing in monetary policy. This Friday (May 17), Chinese equity prices (CSI300) were again down 2.5 %. 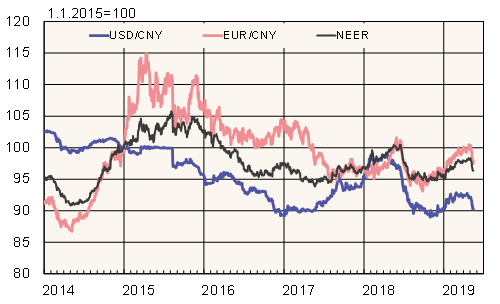