Russian real disposable household incomes last year were essentially unchanged from 2017. Revenues initially showed gains in the first half of the year, only to decline in the second half. In the post-Soviet era, the peak in real incomes was reached in 2014. At the end of 2018, real disposable incomes were about 13 % below the 2014 level.

Although disposable incomes have generally been on a downward trend over the past four years, real wages started growing already at the beginning of 2016. In addition to wages, disposable income also includes a variety of social entitlements such as pensions, as well as capital income and an assessment by the Russian Statistics Service of wages paid under the table. 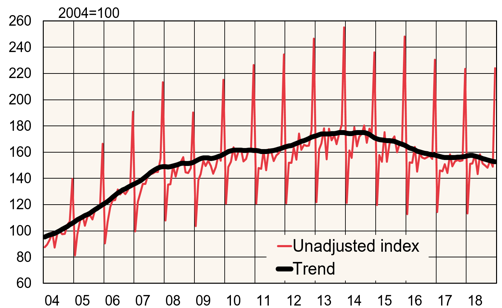