Industrial output in 2018 was up 2.9 % from the previous year. However, seasonally-adjusted time series have shown little indication of growth since last spring.

Output of extraction industries grew faster last year than other industries, increasing by 4.1 % from the previous year. Oil production grew strongly towards the end of the year after the Organization of the Petroleum Exporting Countries (OPEC), Russia and several other countries agreed on a looser interpretation of their production quotas. Production should decline this year, however, with the introduction of lower production ceilings.

Manufacturing growth slowed towards the end of last year. Last year, production grew 2.6 % from the previous year, but in December, it was at the same level as in previous December. Different manufacturing branches have grown quite evenly. However, pharmaceutical and forest industries have grown somewhat faster, while metals and auto industries somewhat slower.

Construction activity statistics have been revised by the Russian Statistics Service to an exceptional degree. December figures showed that construction activity last year was roughly on the same level as the previous year. Revised figures released in January show construction had grown by 5.3 %. Especially the figures for northern regions involved in oil and gas production were revised sharply upwards. Explanations for the revision have been mostly general in nature.

The volume of goods transport last year was 2.9 % larger than in previous year. Almost half of transports go through pipelines and almost half on rail. Transit freight is not significant enough to much affect the growth figures. The Power of Siberia natural gas pipeline will not increase the overall pipeline transmission volumes until next year.

Agricultural output was down 0.8 % from 2017. Grain harvests were 16.7 % lower than in 2017, but still at a level well above the average of the past decade. Wheat accounts for two- thirds of the grain harvest. Because Russia exports quite a lot of wheat, the smaller crop is likely to affect global wheat prices. For many countries in the Middle East, the fertile southern steppes of Russia are a major wheat source. It was still unclear last autumn whether Russia would limit grain exports to hold down domestic prices. It now seems that idea is off the table for now. 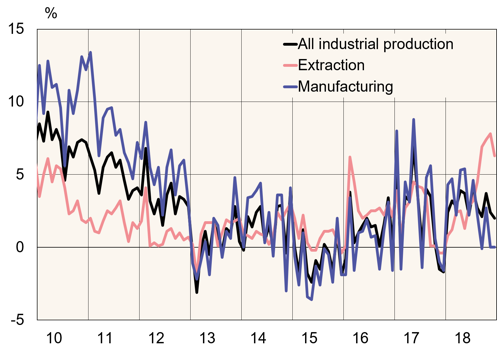