The recovery in seasonally adjusted retail sales continued in April. From twelve months earlier retail sales were up nearly 2.5 %. Real household incomes also rose by several per cent in on-year terms in the first four months of the year. The recovery in fixed investment slowed a bit from last year. Fixed investment in the first quarter was up 3.5 % y-o-y. After a long period of decline, construction activity also revived in April.

As in previous recoveries, the revivals of domestic demand increased imports, even if import growth has slowed in recent months. Domestic production has grown much more slowly. Rosstat reports that first-quarter GDP grew by 1.3 % y-o-y. 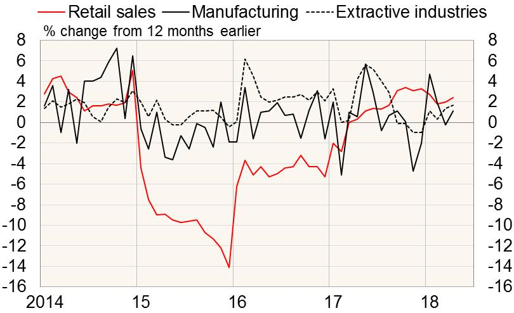