Even as the Russian economy began to revive from recession last year, Rosstat reports that its labour force survey of people aged 15 to 72 years found the number of employed people declined slightly. Their number last year averaged around 72.1 million. A mild drop in employment is fairly unusual during periods of economic growth, even if the same thing happened also during two years in the past. Moreover, the number of unemployed persons fell slightly last year to just under 4 million people, a record low. The unemployment rate was 5.2 % in the labour force formed by 15−72-year-olds (according to Russia’s regularly conducted labour survey based on the International Labour Organization’s methodology).

Rosstat’s monitoring suggests that the decline in the number of employed people may in part stem from the fact that large and mid-sized firms employed more effectively their part-time and temporarily laid-off workers. In a couple of years earlier, the number of part-time workers and those temporarily laid-off increased. Last year their number contracted considerably, while the number of hours worked per worker increased in an exceptional pace. In addition, a slightly larger number than usual of Russia’s well over 10 million working pensioners may have ceased working. Since 2016, working pensioners have no longer been eligible for a general inflation adjustment to their pensions if they continue to work.

The reductions in the numbers of both employed and unemployed persons meant a sizeable drop in the labour force last year. While pensioners ending their work naturally exit the labour force, the biggest factor is demography, whereby the working-age population has shrunk continually since around 2005. The employment rate for the working-age population is increasingly harder to raise. Despite the contraction in employment last year, their employment rate was still above 76 %. 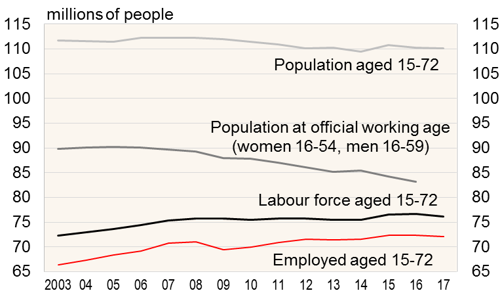