Wages and pensions paid out of government budgets at various levels fell sharply in real terms in 2014–16 on small nominal cost-of-living adjustments (COLAs) especially compared to inflation that flared up in 2015. General COLAs were reintroduced last year for pensions and most focal forms of social support. This year they and the general increase for civil servants will be closely COLA-based (projected inflation under 4 %). The increases are small relative to huge hikes of earlier election periods (2007–08 and 2011–12).

After a freeze for the past four years, president Putin last spring proposed a general increase in government sector wages. Civil servants working at the federal, regional or local level received general increases on 1 January 2018. Wages for those government sector workers for whom Putin in spring 2012 ordered large and long upward adjustments will continue to rise rapidly. The general hike in the minimum wage at the start of the year also gives a boost for some budget-sector workers. The increase was over 20 % and a further hike (some 15 %) was just promised by Putin for 1 May (instead of 1 January 2019 set up to now). That will raise the minimum wage for the first time to the official subsistence minimum.

Old-age pensions were also raised already on 1 January, while the zero-hike policy for working pensioners continues. The hikes to recipients of government pensions and social pensions, irrespective of working status, come in spring. The maternity capital pack is extended to 2021. Its use in buying or building a home or paying for child care have been eased. Part of low-income families with small children will now receive monthly maternity support for up to 1.5 years per child.

All pensioners will now be eligible for a revised land tax discount that applies e.g. to small home plots. Uncollectable tax arrears, their increases and fines levied on private persons for property, land or vehicle taxes incurred before 1 January 2015 will be erased from the record. The same applies to all taxes of current and former no-company individual entrepreneurs and practitioners (except excise taxes, foreign trade taxes and taxes on resource extraction), as well as their belated mandatory social taxes from before 1 January 2017. 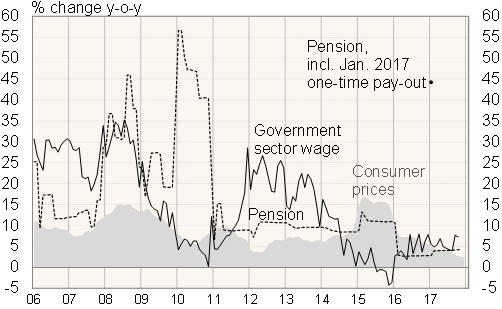