After appreciating for a few months early last year, the ruble's exchange rate generally slid down. While the ruble's December average rate was up 6 % y-o-y against the US dollar, it was down against the euro by over 5 % y-o-y. The ruble's nominal effective exchange rate (trade-weighted basket) was largely unchanged from December 2016. Relative to its 2016 lows on average, the ruble last year was up by nearly 15 % against the euro, dollar and the trading-partner currency basket. The strong recovery in Russian imports was driven by ruble appreciation.

Compared to previous years, the ruble's exchange rate occasionally diverged more from the courses of oil prices. In the early months of 2017, a strong current account surplus supported the ruble. This is typical as imports are low in the early months. In addition, the financial account rather exceptionally showed a surplus, i.e. net inflows of capital into Russia. The final months of 2017, however, witnessed a slight drop in the ruble's exchange rate despite rising oil prices and a current account surplus because the net outflow of private capital increased (preliminary estimate from the central bank), which observers note was due e.g. to expectations of tightening by the US Fed and the announcement of new US sanctions.

Besides these market flows, the finance ministry's forex market purchases through the central bank were small in the total volume of forex trade, and their impact on the ruble has been considered insignificant. The new budget rule permits more forex buying if oil prices significantly exceed the rule's basic calculation price (Urals USD 40/barrel). 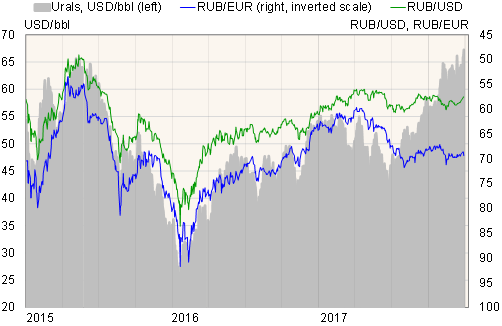