The yuan strengthened 4 % against the dollar between late July and early September. While some of the appreciation reflected dollar weakness (the dollar's nominal effective, or trade-weighted, exchange rate fell by 2 %), the yuan appreciated also against the currencies of other major trading partners. The PBoC's CFETS index climbed nearly 3 % and the yuan-euro rate was up by 1 %. On Friday (Sept. 15), the yuan-dollar rate was still 6 % higher from December 31, while the yuan has lost about 6 % against the euro this year.

The mechanism for setting the yuan's daily trading rate has incorporated a countercyclical factor since early summer (see BOFIT Weekly 22/2017). The new feature appears to provide an additional means for the PBoC to influence the yuan-dollar exchange rate in a desired manner.

The yuan lost ground slightly this week after the PBoC on Monday (Sept. 11) dropped its 20 % reserve requirement on forex forward transactions and on yuan-denominated deposits in Hong Kong and other clearing centres abroad. The PBoC imposed the reserve requirements in late 2015 and early 2016 in response to yuan weakness and high capital outflows. Ending the reserve requirement reduces the forex trading costs and makes it cheaper to cover against rate shifts.

Although the value of yuan deposits in Hong Kong fell by half during 2015–16, the stronger yuan has slightly revived them. The freely set Hong Kong offshore yuan rate (CNH) is often used to measure adjustment pressures on the yuan. However, when there was strong depreciation pressure on the yuan in 2016, China manipulated also the CNH rate. The difference between the mainland China onshore rate (CNY) and the offshore CNH rate this year, however, has been negligible.

Exchange rate appreciation and the state's tighter measures have calmed capital outflows from China. The value of China's foreign currency reserves has risen by 81 billion dollars this year, standing at 3.092 trillion dollars as of end-August. Some of the valuation increase comes from exchange rates changes. When gold, SDR and IMF reserve components are included, the value of total reserve assets rises to 3.188 trillion dollars. 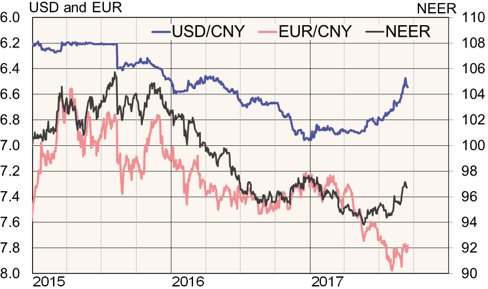