China's gross domestic product in 2016 rose 6.7 % in real terms, down from 6.9 % in the previous year. Nominal GDP increased to about 74.4 trillion yuan ($11.2 trillion). The usual caveats apply and the numbers should only be taken as rough indicators, as China's GDP growth seems implausibly stable and the reliability of statistics has its issues. Statistical problems were highlighted in January with the revelation of a massive statistical manipulation that had gone on for years in the Liaoning province.

China's production structure is changing as growth slows. Services last year contributed 52 % of GDP, while the share of industrial and construction activity fell to around 40 %. Agriculture and other primary production accounted for less than 9 % of the Chinese economy's total output, even though the farming sector employed over a quarter of the workforce. Industry employs slightly more than primary production, but its share of the workforce overall also began to shrink a couple of years ago. At the same time, the number of people employed in the service sector has soared. Services now employ perhaps 44–45 % of the workforce.

Demand-side GDP figures will only be released later. The available indicators show that fixed asset investment (FAI) has experienced a dramatic slowdown in growth. The pace of private investment growth fell to 4 % in real terms. Even the stimulus policies that drove 17 % growth in public investment failed to offset the impact of the slowdown. This suggests investment represents a dwindling share of total demand, while the significance of private consumer demand is rising (even if the growth in real disposable incomes has slowed to around 6 %). The rapid growth in consumer demand and tepid growth in foreign trade has reduced foreign trade's share of GDP. This has been expected, and does not signal a waning of the general importance of openness or international economic relations to China's development. 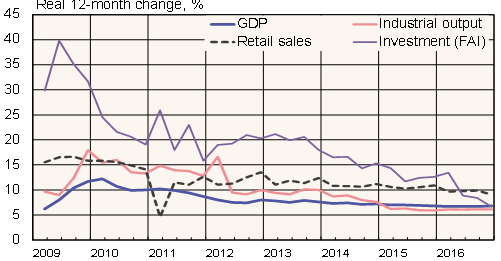