Budget revenues were significantly increased with the sale of a minority stake in state oil giant Rosneft. Money from the sale was channelled as dividends from a state-owned enterprise that owned the shares and came as revenue to the federal budget. Thus, budget revenues contracted in nominal ruble terms in 2016 by just 1.5 %. If the sale of Rosneft shares is omitted, revenues would have declined nearly 7 %. The sale of state property is not typically treated as budget revenue, but rather as an item to finance the budget deficit.

Revenues from oil and gas taxes declined last year by nearly 20 %. This was a slightly smaller drop than in 2015. In the final months of 2016, the revenues exceeded the level of 12 months earlier. Value-added tax revenues (which go entirely to the federal budget) rose by nearly 8 %, or about the same as in 2015 (even if inflation no longer lifted the nominal value of VAT collections as much as in 2015). Other budget revenues (excl. revenues from oil and gas taxes, VAT and sale of Rosneft shares) fell sharply from their 2015 peak.

Federal budget spending took a big bounce in late 2016, when the defence industry was given a large sum to pay back their bank debts. Without this special operation, nominal budget spending for the year would have been roughly the same as in 2015. The operation lifted spending growth to 5 %. Defence spending growth slowed from previous years but was still nearly 20 % due to the special operation. Nominal spending on domestic security and order, which comes almost entirely from the federal budget, again declined slightly. Nominal growth of other spending was only 2–3 %.

The federal budget deficit was 3.5 % of GDP. Without the income from the Rosneft sale, the deficit was 4.4 % of GDP. 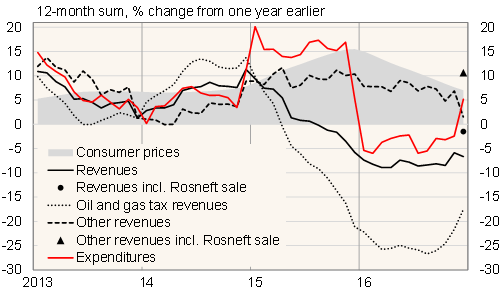