The government’s official purchasing manager indexes (PMIs) for December declined slightly from their November readings. The manufacturing PMI fell from 51.7 in November to 51.4 in December, while the services PMI went from 54.7 to 54.5. An index reading above 50 indicates expansion from the previous month, while a reading below 50 signals a contraction in output.

The private Caixin/Markit manufacturing purchasing managers index, which focuses more on sentiment in small and medium-sized firms, saw a rise in its December reading to 51.9. While the official and private PMI indexes showed conflicting directions in December, their readings suggest economic conditions improved in 2016.

China’s 2016 GDP figures will be released on January 20. Earlier information suggests that economic growth in 2016 likely slowed modestly from the 6.9 % pace of 2015. The growth is expected to slow further this year, as the debt situation worsens, uncertainty in the real estate sector continues and the net outflow of capital persists limiting possibilities to stimulate the economy. Rising market interest rates and possible disputes over trade policy with the incoming Trump administration have further clouded China’s growth prospects.

Yet even with lower growth, however, the performance of the Chinese economy should far exceed the global growth rate. Therefore, proponents of reform policies and sustainable growth welcome some recent comments on China’s growth targets. Bloomberg reported a couple weeks ago president Xi Jinping saying to economic decision-makers of the Communist Party of China he is ready to abandon the current GDP growth target of 6.5 %, if reaching the target means excessive debt load and greater risk to economic stability. Last week, a member of the People’s Bank of China’s monetary policy committee called for more flexible growth targets. This week the lead editorial in Caixin, China’s leading business magazine, took a strong pro-reform stance and rejected the current blind pursuit of growth targets. 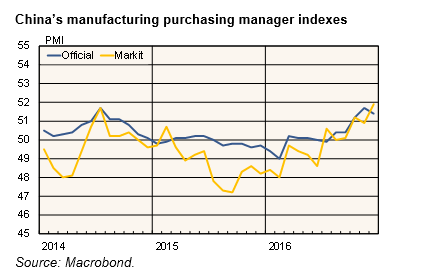