With data on balance sheets or income statements no longer published on a regular basis, assessments are based on less granular data by the Central Bank of Russia. Figures for Russia’s banking sector overall show that the loan stock of banks grew slightly from January to September, partly a reflection of programmes to support housing loans and lending to businesses. Lending in foreign currencies has diminished and some banks have converted existing forex loans to ruble loans.

There was a brief contraction in household deposits during the initial February-March panic after Russia invaded Ukraine, as well as a second slight contraction at the end of September, when people fleeing the country withdrew large amounts of cash from their bank accounts. Growth in the stock of corporate deposits has been supported in particular by repatriation of export earnings in the energy sector.

As the war continues, it has become clear that sanctions could impact Russian payments in Western currencies for years to come. Russian officials have responded by strongly encouraging a move away from dollar-based payments and payment systems. Payments domestically are handled by the payment transfer system owned by the CBR. The ruble and other currencies such as the Chinese yuan are encouraged for those engaging in foreign trade. Demand in Russia for “unfriendly currencies” (essentially dollars and euros) has declined somewhat, while demand for the Chinese yuan has grown rapidly. The yuan’s share of currency trades on the Moscow currency exchange had risen to 30 % at the end of September.

The threat of expanded sanctions and hikes in service charges in foreign currency accounts have reduced the popularity of dollar- and euro-denominated investment products and loans. Before the war, over a quarter of bank accounts were forex accounts. By August, that share had fallen to just 12 %. Yuan-denominated deposits have yet to gain wide popularity. Circumventing the use of Western currencies in international transactions, however, is difficult and expensive. In August, three-quarters of new forex lending was still granted in unfriendly currencies. The information has been compiled from CBR publications as data on the ruble-forex split in payments and loans is no longer released.

Bank deposits in Russia have barely increased at all this year 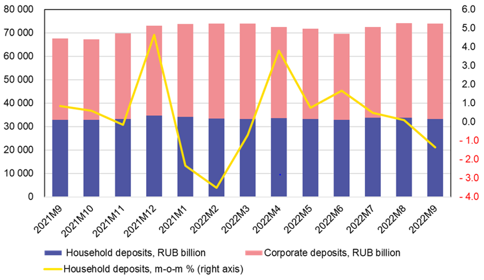