Unlike other demand-side categories, the real volume of exports of goods and services grew overall at an average rate of 4 % a year in 2015−17. This year's growth has been even higher. Exports correspond to over a quarter of GDP. The pace of export volume growth in recent years has directly added about one positive percentage point a year to changes in GDP.

Most export growth over the past couple of years has come from non-energy exports. Led by grain exports that have tripled over this decade, exports of agricultural products have soared in recent years. Chemical exports have increased steadily for many years, mostly from traditional chemical exports such as fertilisers. Metal exports have also risen substantially this year, particularly ferrous metals and copper. Exports of services have increased significantly over the past year-and-a-half, not just in the core categories of transport and tourism, but other services as well. 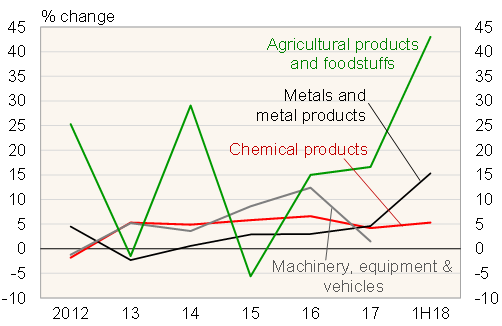