The economic recession of recent years has overall been reflected unevenly in the economic performances of Russia's regions. While Russian GDP overall contracted by about 3 % in 2015–2016, GDP growth across Russia's over 80 regions ranged from a contraction of 12 % to growth above 20 %. While there seems to be no clear geographical patterns, growth regions included e.g. northern oil and gas producer regions (Nenets and Yamalo-Nenets autonomous okrugs), the Republic of Chechnya (which relies heavily on federal budget funding) and the Tula region (which has benefitted e.g. from heavy defence spending in recent years).

Income levels also vary widely across regions. In terms of purchasing power, Russia's richest regions include Moscow and St. Petersburg, while the poorest regions are found in ethnic minority-dominated republics in southern and south-eastern Russia such as Ingushetia, Tuva and Kalmykia. 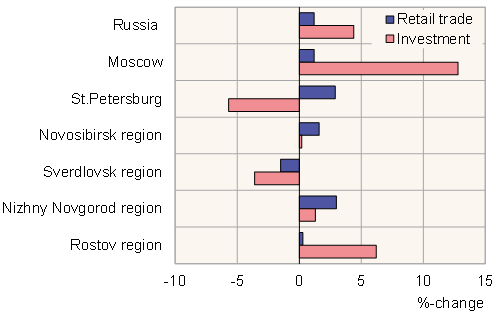