With the reopening of China's financial markets after the Chinese New Year Holiday, the People's Bank of China applied slightly higher interest rates than before the holiday for its open-market operations and for its short-term lending facilities. The main open-market operations tool for the PBoC currently is reverse repos, where the central bank loans money to commercial banks against collateral for certain maturities. The reverse repo rate was increased by 10 basis points so that last Friday (Feb. 3) the 7-day lending rate stood at 2.35 %. The central bank also supplies short-term lending to commercial banks through standing lending facility (SLF), which saw rates raised by 1o–35 basis points. The PBoC earlier this year raised rates on credit provided to banks under its medium-term lending facility (MLF). 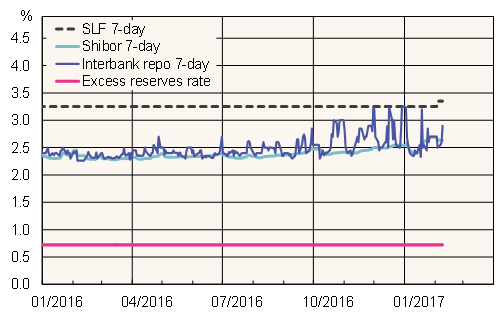 While the rate hikes are quite modest, they signal the readiness of the PBoC to tighten monetary stance and that the PBoC has the blessing of the country's top leadership to do it. On the monetary policy front, the challenge is still balancing rising indebtedness and the outflow of capital against the supporting economic growth and providing life support to struggling state-owned enterprises through cheap loans.

Besides the tightening of the monetary policy stance, China's monetary policy is undergoing a huge systemic overhaul, whereby administrative regulation will be gradually phased out in favour of market-driven policies. The interest rates that commercial banks set for their customers were deregulated in October 2015, after which central bank's lending rates and open market operations have taken a higher profile in implementing policy. China, however, has never announced an official guidance rate and monetary policy has involved a wide selection of instruments. Apparently, the central bank is introducing an interest-rate band, with SLF rate acting as the upper boundary of the band. The natural lower boundary would be the interest rate that the PBoC pays on deposits in excess of the reserve requirement. The central bank claims it uses MLF rates to guide longer-term interest rates. The problem with such an arrangement is that the SLF and MLF rates are only published after loan deals are completed, so the actual interest rate at a given moment is not necessarily public knowledge. Communication of the policy would also be much easier if the PBoC would pick one money market interest rate as its target rate.

The sheer number of targets are a burden on monetary policy in China. The PBoC still steers exchange rates and uses monetary policy tools for fiscal policy purposes. For example, the PBoC offers cheap financing to projects favoured by the state. Pledged supplementary lending (PSL), and to some extent MFL instruments, are used for these purposes. Reserve requirements are also lowest for banks that support preferred projects and sectors. The IMF would like to see Chinese monetary policy focused more on inflation targeting, paving the way for a fully floating exchange-rate regime for the yuan.