Industrial output increased in 2016 in all of Russia's federal districts (FD), which encompass numerous regions, and in greater Moscow, which includes the city and the surrounding Moscow region, as well as St. Petersburg. Growth was only 0.5–1.5 % in the Northwest, Volga and the three FDs east of the Urals, but over 6 % in the greater Moscow region and in the south.

In contrast, the volume of retail sales continued to fall last year in all FDs. While the drop was no longer deeper than a couple of per cent in the Northwest, Volga and the south, it was 6–7 % in the Central and Urals FDs. In 2015–16, retail sales dropped 16–18 % quite widely, i.e. in the greater Moscow region and elsewhere in the Central FD, as well as in the Volga, Urals and Siberian FDs. Retail sales in St. Petersburg fell about 6 % during the two years.

Over the past decade, industrial output and retail sales have grown at very different rates in different parts of Russia (chart). The sharpest increases in retail sales were in the south, and in the Volga and Far East FDs. Greater Moscow still dominates, however, accounting last year for well over 20 % of all retail sales in Russia. Industrial output has risen fast in the Far East and Siberia due to extractive industries, and in the south due mainly to manufacturing. Industrial growth has been slow in the Central and Northwest FDs, and non-existent in the Urals, where growth has been constrained by high dependence on declining oil & gas production. 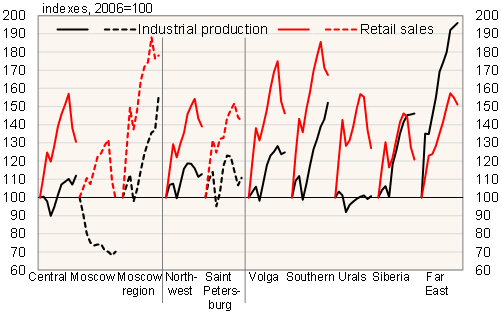