Short-term market interest rates (e.g. Shibor 7D) were up about 0.2 percentage points in the first half of December compared to mid-July. Along with tighter restrictions on cross-border capital movements, higher rates dampen currency outflows and support the yuan’s exchange rate against other currencies. Yuan interest rates in Hong Kong have risen more sharply than in mainland China. Interbank rates (e.g. CNH Hibor 7D), which were below 2 % in August, have been on average 7 % in December. Rising interest rates in Hong Kong have helped keep the yuan off-shore rate near mainland China’s on-shore rate.

The People’s Bank of China have kept unchanged its reference rates for deposits and credit, as well as its deposit reserve requirements. Nevertheless, the PBoC’s liquidity operations have recently focused on long-term lending which could have caused nominal interest rates to rise. Behind the interest rate rise might also be the PBoC’s window guidance policy. However, the recent pick-up in inflation means real interest rates have fallen in recent months. The rapid growth in lending in November also suggests that the monetary policy tightening has only been marginal at most.

Many companies have resorted to short-term credit to roll-over their old debts. If interest rates continue to rise, it could affect their financial stability. Moreover, if real interest rates begin to rise meaningfully, it would be harder for China’s leaders to reach their 6.5 % GDP long-term annual growth target. However, rising interest rates should restrain rising indebtedness and strengthen economic fundamentals.

Many expectations and pressures afflict China’s forex and financial markets. Administrative regulation and tighter currency controls imposed this autumn do not resolve the basic causes of market distress, and instead create uncertainty over the direction of policies. The stated goal of China’s market reforms is to shift to interest-rate based monetary policy and allow greater exchange rate flexibility. Given the current circumstances, it may be time to take steps in that direction. The situation on financial markets underscores how a pursuit of a numeric GDP growth target complicates efforts to formulate and implement appropriate economic policies. 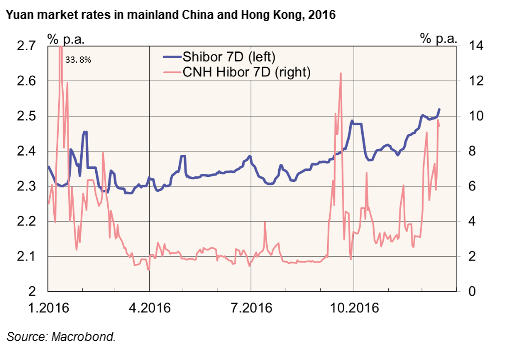