In August, the government withdrew 390 billion rubles ($6 billion) in assets  to cover the federal budget deficit. Even so, the Reserve Fund still held at month’s end about 2.1 trillion rubles ($32 billion, or nearly 3 % of GDP). This year the government has withdrawn 1.2 trillion rubles to cover budget expenses and plans to use another 900 billion rubles by the end of the year. The 2016 budget assumes an average price of $50 (3,165 rubles) a barrel for Urals-grade crude oil, but the realised average for January-August was only $40 (2,690 rubles).

The value of Russia’s other oil fund, the National Welfare Fund, was 4.7 trillion rubles ($73 billion) at end-August. Russia’s finance ministry has stated that the National Welfare Fund could be tapped to fund budget deficits, even if such use deviates from the fund’s original purpose. About a third of that fund is already tied up in e.g. long-term bank deposits and corporate bonds. So, Russian oil funds in total currently hold liquid assets worth about 5.2 trillion rubles ($80 billion, 7 % of GDP). Last year’s spending as well as this year’s budgeted use of the funds amounts to 2.1 trillion rubles.

Foreign currency and gold reserves are not directly connected to the budget discussion as their primary purpose is to provide liquidity to cover foreign obligations in the event of a severe sudden shock. The liquid assets of Russia’s oil funds are included in the forex reserves, because the Central Bank of Russia administers these assets under the same principles as the other forex reserves. Notably, when oil earnings are used to cover ruble-denominated expenditures, the value of Russia’s forex reserves does not change. At the end of August, the value of Russia’s foreign currency and gold reserves stood at $393 billion, an increase of $25 billion from January. 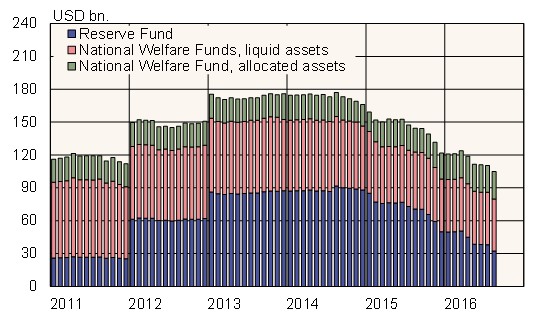