Russia’s invasion of Ukraine is having profound impacts on Russia’s economic future. Western sanctions continue to raise both the direct and incidental costs of war. EU import bans are reducing Russian budget revenues. International export bans on dual-use products are limiting Russia’s ability to arm and supply its invasion force. The lack of access to high-tech inputs is eroding Russia’s opportunities for future growth.

The increased uncertainty and instability resulting from Russia’s invasion of Ukraine are likely to depress private consumption and private investment. In addition, several of Russia’s most significant partners in trade and investment have signed on to broad economic sanctions of Russian entities. Sanctions have effectively shut Russia out of international financial markets and international payment transfers have become slow and expensive. A significant chunk of the central bank’s foreign currency reserves are frozen. Restrictions on goods trade and decisions by many international firms to either voluntarily cease operations in Russia or completely withdraw from the country have broken logistics chains and caused prices of many imported goods to skyrocket. Certain EU-imposed import bans on goods such as timber, wood products and steel products are already apparent in the form of decreased sectoral production.

The Central Bank of Russia’s dramatic policy measures at the start of the invasion prevented the outbreak of a widespread financial crisis in Russia. To staunch the outflow of capital, strict controls were imposed on taking foreign currency out of the country. Withdrawal of foreign currency cash was highly limited and exporting firms were required to repatriate 80 % of their export earnings into rubles. To prevent depositor flight, the CBR, among other things, raised its key rate to 20 % and flooded the market with liquidity. The Russian stock market was closed for a month to prevent a meltdown. Although most of these temporary measures have been rolled back, considerable restrictions on foreign investors on repatriation of assets remain in place. As a consequence of these measures, the ruble has ceased to be a free-floating currency. It will be years before most Russian commercial banks and corporations are again able to raise funding on international markets. It is hard to make a true appraisal of Russian banking sector as several regulatory ratios have been temporarily softened and bank lending is currently supported by a range of government programmes.

Russia experienced a smaller-than-expected contraction in the first half of the year as the acute financial crisis at the start of the invasion passed quickly and prices for Russia’s main exports soared. The second half of the year the economic contraction continues and accelerates. Falling demand and ruble appreciation have cooled upward price pressures, but 12-month inflation is still quite high. To prop up the Russian economy, the CBR has lowered its key rate to a level well below the headline inflation rate. As of end-September, the key rate stood at 7.5 % and inflation at 13.7 %.

Uncertainty and Western sanctions cloud the economic outlook for 2022–2024

War unavoidably increases pressure for government spending. We expect spending on defence and domestic security to increase in the forecast period. Further, the defence industry is supported through both administrative measures and cheap lending to systemically important firms. At the same time, the government plans to support the purchasing power of average Russians through hikes in social entitlements such as pensions and support for families with small children. Other public sector spending may have to be cut in order to keep the deficit in coming years close to the target annual level of roughly 2 % of GDP. With the freezing of National Welfare Fund assets, the budget deficit will be funded out of previous years’ surpluses and domestic borrowing. Naturally, the government can turn to the central bank for funding as needed in exceptional circumstances.

Even with fiscal support, private consumption is on track to fall significantly. Uncertainty will cause many companies to postpone major investment projects and the average wage is unlikely to keep pace with inflation. Russian firms often seek to avoid lay-offs in hard times by cutting wages. Such labour market flexibility requires a willingness on the part of Russian workers to accept large fluctuations in their real wages. If real disposable incomes contract this year and next year even slightly, the average real disposable income of Russians falls further to levels last seen in 2010. The partial mobilisation and the flight abroad of several hundred thousand potential recruits will further depress private consumption in Russia.

Ongoing war and uncertainty will deter private, market-based investment. Thus, any growth in fixed investment will increasingly require action from the government and state-owned enterprises. The Russian state will pour money into its defence contractors and support construction of new export routes to the east and south. Success of Russia’s import substitution strategy requires vast investment in domestic industries, but financing such investments is likely to be difficult. Moreover, it could take years to develop the sophisticated bodies of knowledge needed to master certain technologies. In the future, investment will be financed mainly from retained earnings or through domestic borrowing. Russia will no longer have access to the Western capital and expertise that come with new investment projects. Even countries considered “friendly” by Russia are extremely reluctant about making significant investments in Russia at this juncture.

Isolation from the global economy has begun

Net export growth in particular should support economic development this year. Large swings in the ruble’s exchange rate, payment difficulties and Western sanctions should all combine to depress imports this year by about 25 %. We only expect imports to recover very slightly next year. In contrast, the value of Russian exports has gained on higher global commodity prices even if development in export volumes has varied between sectors. Although many large oil purchasers have shunned Russian crude oil since the Ukraine invasion, Urals blend has found willing buyers in India, China, Turkey and elsewhere. Russia’s exports of natural gas, timber, wood products, steel products and coal should decline in the second half of this year.

This forecast assumes that the EU’s restrictions on imports of Russian crude oil and petroleum products enter into force as planned in December 2022 for crude oil and February 2023 for petroleum products. We further assume that sanctions otherwise remain in place in their current form throughout the forecast period. If these assumptions hold, we anticipate an exceptionally large contraction in Russian exports next year.

War has led to increasing disengagement of Russia from participation in the global economy. Even granting that war always increases the role of the state in the economy, an end to the occupation of Ukraine would not alter the political compulsion of Russia’s current regime to create a self-sufficient economy. Russia has irreparably burned its bridges with important Western economic actors, and there is no path of return to the old status quo. Increased cooperation with China only replenishes a small fraction of the losses from shattered relations with the West. Moreover, the brain drain fuelled by war and mobilisation enfeebles Russia’s opportunities for future growth. Russians face a long and painful adjustment to lower living standards.

We now expect Russian GDP to contract by 4 % this year and 4 % next year – with the caveat of no further major shifts in external conditions. Russia is projected to revert to very modest growth in 2024, but importantly, there will be no rapid recovery. The war and international isolation of Russia will further lower the country’s already depressed potential growth rate.

The unpredictability of war makes it especially difficult to forecast Russian economic trends. Both the course of the war and Western sanctions will have large impacts on Russian economic development. This forecast assumes that war continues, but does not significantly expand from its current scope. Alternative scenarios are fully plausible. It is possible that Russia’s military losses continue to rise, and the authorities will react with further rounds of mobilisation, commandeering of production facilities and equipment, and financing budget deficits by direct central bank funding. In such a scenario, the economic effects of war would be greater than in our baseline. The rest of the world could also expand the range of sanctions imposed on Russia.

Albeit highly unlikely at this point, it is possible that war ends with Russia’s withdrawal to its internationally recognised borders. If Russia abandons its occupation and a stable peace can be negotiated, international sanctions could be lifted gradually allowing for a speedier economic recovery.

Forecasting the economic implications of a war of occupation and annexation are also difficult due to the increased unpredictability of Russia’s wartime economic policies. Before the invasion of Ukraine, Russian economic policy was anchored by a floating exchange rate, free movement of capital and fiscal prudence in public finances. All these policies have now been distorted by war. Moreover, it is unclear whether the government even has any desire to return to its earlier peacetime arrangements. The basic economic policy framework has been demolished with little known about the new framework that replaces it. Due to sanctions and import substitution policies, Russia seeks to create a self-sufficient economy that is only loosely linked to the global exchange of goods, services and ideas. There are no good comparisons in recent economic history on which to evaluate this highly idiosyncratic structural experiment.

The lack of available statistical data limits our economic monitoring and forecasting capabilities. Russia has ceased to publish monthly data on, among other things, Russian foreign trade, the structure of budget spending and financial health of the banking sector. By halting publication of some routine data, Russian authorities have sought to complicate assessment of the impacts of Western sanctions. 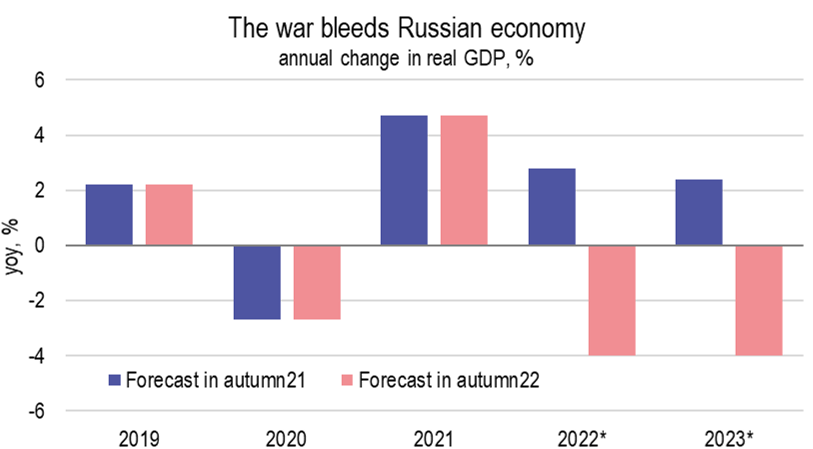